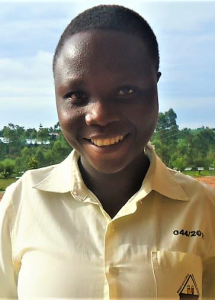 Flavia is a 16 year old girl in her 2nd year of vocational training in Uganda. While she could have chosen a societally-accepted vocation, she chose what she loves: building engineering. When she graduates, she will enter a field that has always been run by men, but that doesn’t scare her. As she breaks the molds, Flavia is an inspiration for girls everywhere.

Life has been difficult for her family so she is determined to change her future. She was only a year old when her father passed away and her mother was left to raise 5 children in poverty. Sometimes Flavia’s mother would work on plantations to make money for the family, but most of the time it could not meet their most basic needs.

Flavia’s life changed when she became a nursery student at Kutamba Primary School. She writes:

My relief came from Nyaka AIDS Orphans Project through the construction of Kutamba Primary School. I was admitted to the school in 2007 upon its opening and was able to study from there up to 2014 when I completed Primary 7. The next year I joined the wonderful Nyaka Vocational Secondary School. I enrolled in the newly established vocational class opted for Building and Concrete Practice, a course most people consider to be for males.

I am determined to become a great engineer and inspire other ladies into the same profession. Being strong and hardworking, I took up this course to become a great and trustworthy engineer in a field that is male dominated. I see my dreams coming true in the near future.

Flavia will be an amazing engineer when she is finished with school. As she pioneers a way forward, Flavia is a role model for all young girls who are want to pursue careers normally never held by women.

Alex lost his dad to HIV/AIDS. His mother, also suffering from AIDS, did not handle her husband’s death well; she feared for her own fate.

One day when Alex was about 5 years old, his mother sent him off to the market to buy some meat. Alex returned, excited for the meal his mother was going to prepare, but he couldn’t find her anywhere. He screamed for her as he searched from room to room. Eventually, he found her in the bathroom, dangling and lifeless.

Alex is about 12 years old now. The trauma lives with him to this day. He deals with his grief by making beads, which with the help of his grandmother he sells locally. It helps, but the pain is still there.

One day in school, a teacher remarked to Alex, “You’re stupid, just like your mother.” Alex left class in anger and returned with a stick. His grandmother was called to the police station, because he had attacked the teacher.

The teacher was expelled. Today, Alex is in Class 7 in Mount Gerizim school. Next year, he’ll be sitting for his exams to get into secondary school.

Alex’s story is a reminder that even as we strive to provide food, shelter, clothing and education, our kids also have strong emotional needs. LittleDrops’ ultimate goal is to provide these children with emotional and psychological support in addition to their basic needs.

As a female born into the Turkana tribe in Kenya, Jane knew she would never receive an education. Instead, she would face a painful female circumcision and be married off to an older man against her will. At age 13, as she was undergoing the three-week circumcision and marriage ritual, Jane decided to run away.

Some local female teachers had heard about LittleDrops through one of our homes. They decided to take her there. For the past 2 years, LittleDrops has been supporting her education.

Jane is currently in her second year of high school. She is planning to complete high school and attend college. Jane hopes to someday work with other needy children, giving them the same chance that LittleDrops gave her.

Moses is a survivor! For the past five years Moses has been supporting his two siblings, his ailing mother and his sick grandmother with limited assistance from his neighbors and a couple of his teachers. Even with this responsibility Moses scored well enough to enroll in Ndururumo High School for his form 1 year.

Part way through last year Moses’ mother passed away leaving him as head of the household. Due to his responsibilities at home and cost of his education Moses was faced with the decision to leave school and work to care for his siblings.

Through the generous decisions we received, we are able to fund Moses’ education. Moses can now attend school for at least another year and work towards his dream of becoming a dentist.

Monica got connect to LittleDrops when one of our volunteers, Jane Koinange went to Kenya.

At the time she was sent home because she owed the equivalent of $1.25, which every student was expected to pay for the drilling of the school toilet. Because her grandmother could not afford to pay, she stayed home for more than 3 weeks.

She was introduced to the Hopeful Grandmother group and was lucky to meet Jane who was doing an assessment of the home at the time. Jane recalls her being very shy and quiet but yet very smart during her interview.

Monica lost her mother to AIDS. She never knew her father. Being an only child she had no siblings.

Monica then did not do very well in her Elementary National Exam (KCPE) due to the difficult times she had with her mums death and having been out of school for an extended period of time. Hopeful grandmothers searched for a school for her and they came across Annesta high school in Nakuru. Though it was a private school and a little more expensive, they felt it was her best option. They believed in Monica and had the support of Littledrops. Monica worked hard for the four years and here are high school results that just came out in February 2012,

Monica now looks forward to joining one of the public University next year and pursue either biochemistry or teaching. Monica is a very happy girl right now.

Miracle got his name from the circumstances of his birth. His single mother died during childbirth but he miraculously survived. He has been raised at the Hopeful Grandmothers Orphanage and the grannies report that he has thrived from day one. He is a curious child and can always be found taking apart any electronic devices he can get his hands on. Miracle became interested in electronics when he realized that ‘the Grannies’ could make a phone call anywhere in the world from their rural village.

Miracle is currently 16 years old and just started Form 3 at Ndururumo High School. His dream is to become a “Computer Geek” as he puts it. Miracle believes that “technology will take humans to the next level” and he wants to be a part of that change.

I am a 14 year old orphan having no mother and father. I grew without knowing my parents because I was still an infant when they died. I came to stay with my grandmother who was not strong enough to provide me with my needs. She tried to provide me an education but my performance was always poor because I was always chased for school fees and sometimes I lacked books and pens. I joined Nyaka in 2004 and was given free education and scholastic materials. I was fed a balanced diet, could drink clean water, and was given clothes. This all made my grandmother very happy. Under the provision of the above needs being satisfied, I began primary one and from there my performance was the best. I became the number one in my class.

When I reached primary seven this year, my grandmother died and I was adopted by the family of Mr. Namara Bahati. When I began living there, my free time which my grandmum had given me to read my books was reduced because there was always so much work. Today, I continue to please them by doing the work and they allow me to read my books to maintain my performance. They provide me with paraffin and sometimes a candle by which to study. My performance will always be good because of the assistance I am given at both home and school, but especially at school because my teachers give me revision books, exercise, and homework.

My goal is to become an engineer because my best subject is science, math, and English. I also wish to help the needy as I was helped too.

Xaverine has a child with both mental and physical disabilities and because schools refused to enroll him at age 18 while he was still on the 6th grade, she decided to found a center that will cater to the needs of disabled children and will treat them with love and compassion, just like other “normal” children are.

Today the center serves approximately 80 children. Although the capacity of the center is limited, there are no fees asked to attend the center. The center produces and sells greeting cards, shoes, handbags, belts and other leather goods. Jyamubandi uses the funds the help finance food, housing, physical therapy, education for the children.  However the association does not earn enough money to finance all these operations and therefore relies on donations to fill the gap. That is where Little Drops comes into play.

Since 2010, Little Drops has donated around $2500/year to the center to help Jyamubandi fulfill its mission.  With the amount donated, Jyamubandi was able to provide medical care to children, buy food, pay school fees for the few children who have been able to integrate ordinary schools.